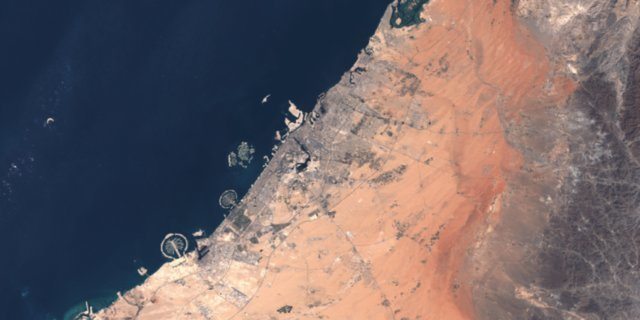 By 2030, the United Nations predicts that cities will house 60% of people globally, and one in every three people will live in cities with at least half a million inhabitants.

NASA satellites have visualized this growth through its Landsat program, the longest-running initiative for collecting satellite imagery of Earth. Landsat satellites have captured images of cities across the world since 1972.

The imaging startup Descartes Labs recently compiled these photos to create fascinating timelapses — from the 1980s to today — of five large cities, including Beijing and Las Vegas.

Take a look below:

In the span of just 34 years, the population of Dubai, UAE has grown from 350,000 to 3 million. The time-lapse below shows the city’s rapid development over that period:

“The architectural scope of that expansion is impressive, particularly the infrastructure and buildings over the water,” Jason Schatz, an applied scientist at Descartes Labs, told Business Insider.

São Paulo, Brazil expanded from around 13 million to 21 million people from the late 1980s to today. As you can see in the time-lapse below, much of this urban growth has resulted in sprawl:

The Las Vegas metro area bloomed from around 540,000 people in 1984 to 2.1 million people today. On the right, you can see that Lake Mead has shrunk, due partly to the region’s increasing water demands:

SEE ALSO: The San Francisco Bay Area’s housing crisis is so out of control, a median-priced home costs $820,000 — here are 5 ways to help fix the problem